Button, Button, Who's Got the Button! All That Stickles Button Bonanza Blog Hop!

Welcome to the Button Bonanza Blog Hop brought to you by the All that Stickles design team!

Buttons are fabulous embellishments to all types of craft projects, and what better than to spruce them up with some Stickles?!

If you have just come across the hop and are looking to start at the beginning, please visit All that Stickles! If you've come from Sonia's blog, you're in the right place.

Hi All!  So glad to have you visiting my blog!  I made a Happy Birthday Treat Bucket for the All That Stickles Button Bonanza Blog Hop! 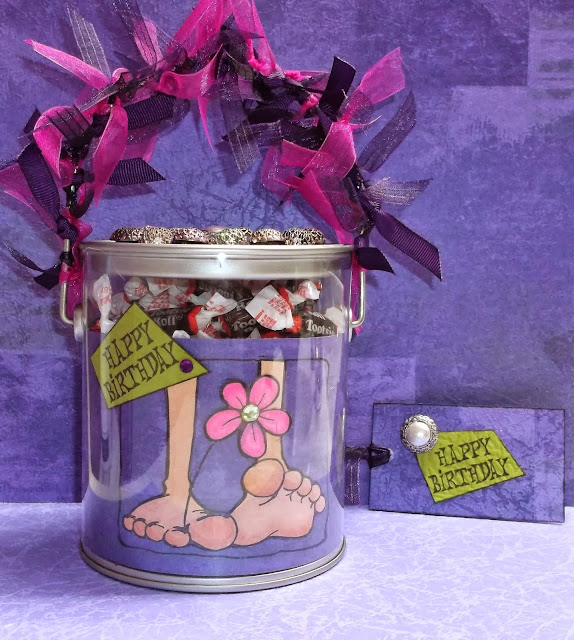 To be safe, only place wrapped food items in mini paint buckets.  Okay, now to the fun stuff...the buttons!  I rubbed the Stickles into the buttons while the shank was still attached...easier to set down to dry.  In the outer circle I used Burgundy, True Blue, Glam Pink, Midnight Blue, Purple, Firefly, and Orange Peel.  For the other buttons, including the one on the mini card, I used Ice Stickles-Crystal Ice!  The lid with covered by some tie-dyed sticky back fabric.   Once the buttons were dry, I cut the shanks off and attached them with Glue Dots. 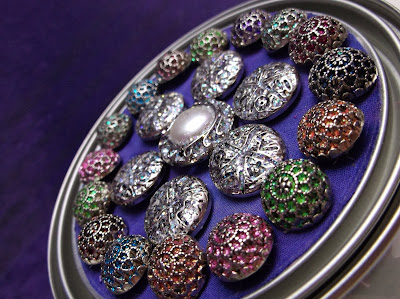 I just love the Happy Feet (large) and Feet Flower stamps from Crackerbox Palace!  They remind me of life in college.   The Happy Birthday 1 stamp is also from them.  If I could have found it, I would have used their Back on Your Feet stamp and made this a Get Well bucket!   The Happy Feet and Back on Your Feet stamps are perfect for Get Well cards!  Now I just have to find it...or buy one and of course, then find it!


Adding the ribbons took the longest time to do, but it is so worth it.  When I tie ribbons I do not cut pieces and then tie them.  What I do is tie the ribbon while having one side attached to the roll.  It saves ribbon and it is much easier to tie...at least it is for me.  I also tied the ribbons one at a time (rather than a few together) in double knots.

I hope you enjoyed my project! 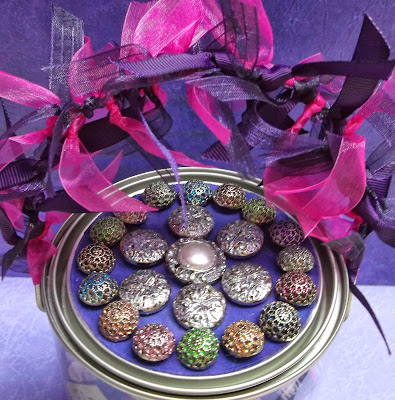 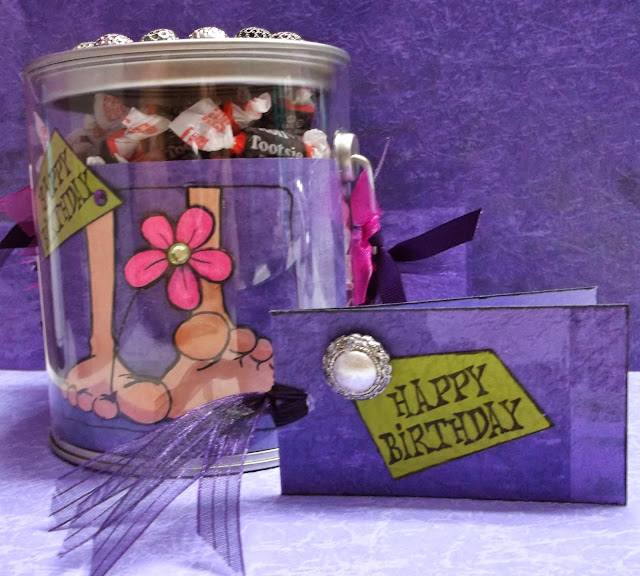 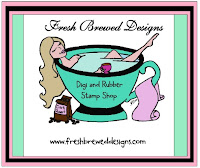 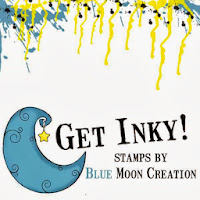 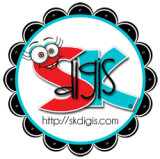 Your next stop is Laura's blog.

Thanks for hopping! :) Don't forget to check out our Halloween Linky Party!
Posted by Karen Schroeder at 12:00 AM 18 comments: 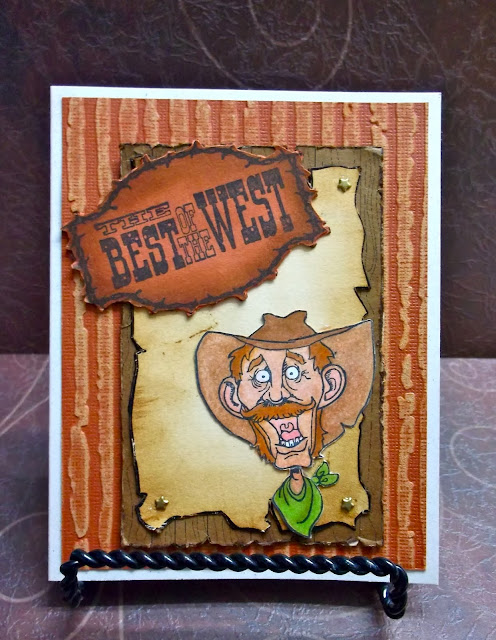 Yahoo...Are you ready for the challenge this week at Drunken Stampers!  Pull yourself up to the bar and have something cool to quench your thirst...it's mighty dusty out there! 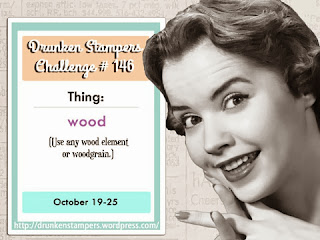 This is Challenge 146-Thing: Wood (use wood or anything woodgrain)  The challenge runs until October 25th  Stop by to see the rest of the Design Team and enter to be chosen as The Life of the Party!

I have woodgrain in two places: The embossed/sanded Rusty Hinge Kraft Core'dinations and the Poster on Wood.  The Rootin' Tootin' Cowboy is Old Geezer.   You can listen to him yodel his song on YouTube.   The Best of the West stamp is made to fit into the Barbed Wire Frame.  All the stamps are from Crackerbox Palace Rubber Stamps.


I stamped the Poster on Wood twice and fussy cut the poster from the cream cardstock.  Then I distressed it with Vintage Photo Distress ink.  I also fussy cut and distressed the Barbed Wire Frame.  Three mini star brads were added to hold up the poster.  The frame was distressed with a distressing tool.

Make sure to mosey on over to Drunken Stampers and enter Challenge 146-Thing: Wood (use wood or anything woodgrain)  by October 25th!

Posted by Karen Schroeder at 4:26 AM 5 comments:

Anyone Want Popcorn for Halloween-All That Stickles! 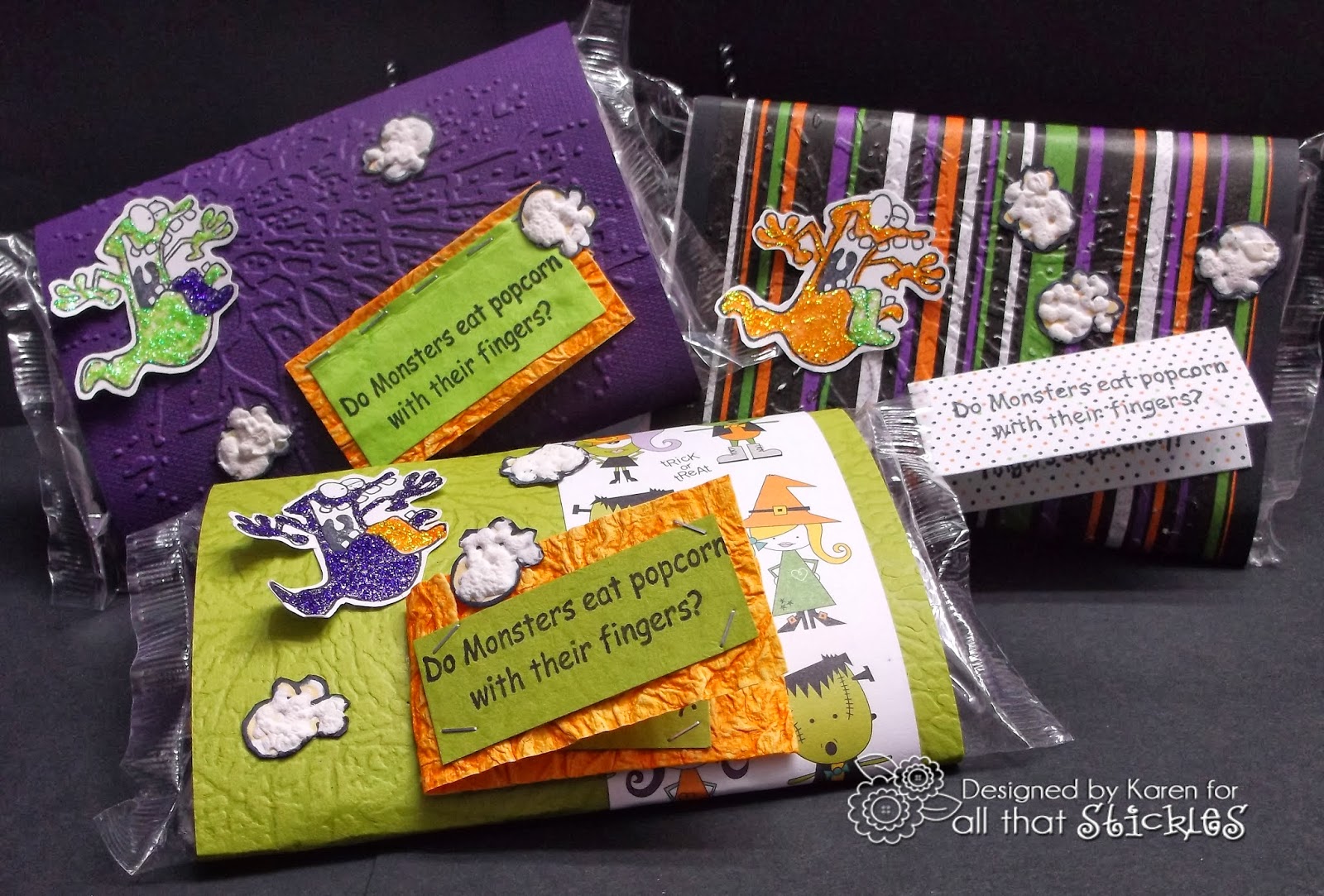 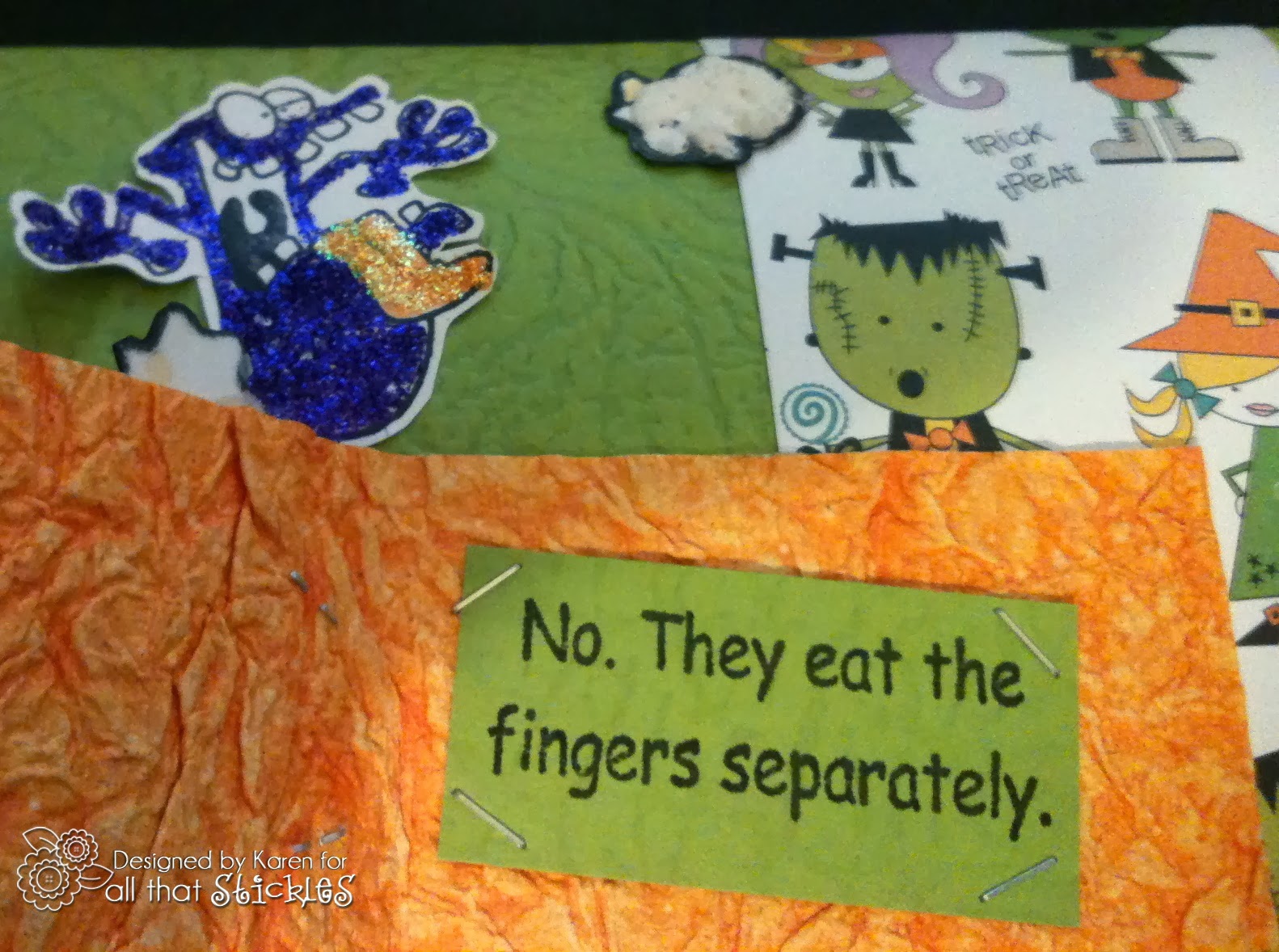 Popcorn wrappers are a great, quick, inexpensive gift for those you want to give a little something!   These were made for Halloween, but the one in purple could be given as a birthday treat, a thank you, a RAOK, almost anything.
The stamps; Slimer, Monster Fingers, and Popcorn Kernel from Crackerbox Palace Rubber Stamps.  I really love their stamps!  Check out the Crackerbox Palace Rubber Stamps website...they have some really funny sayings!

The Stickles I used are Firefly, Orange Peel and Purple!  These Stickles, along with Black Diamond  are perfect for Halloween. 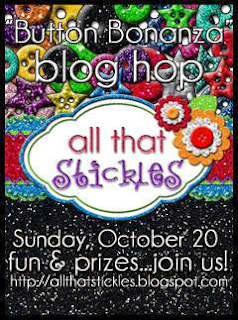 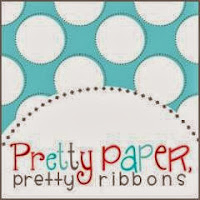 I am entering this Project in the following challenges:

Posted by Karen Schroeder at 1:57 AM 8 comments: 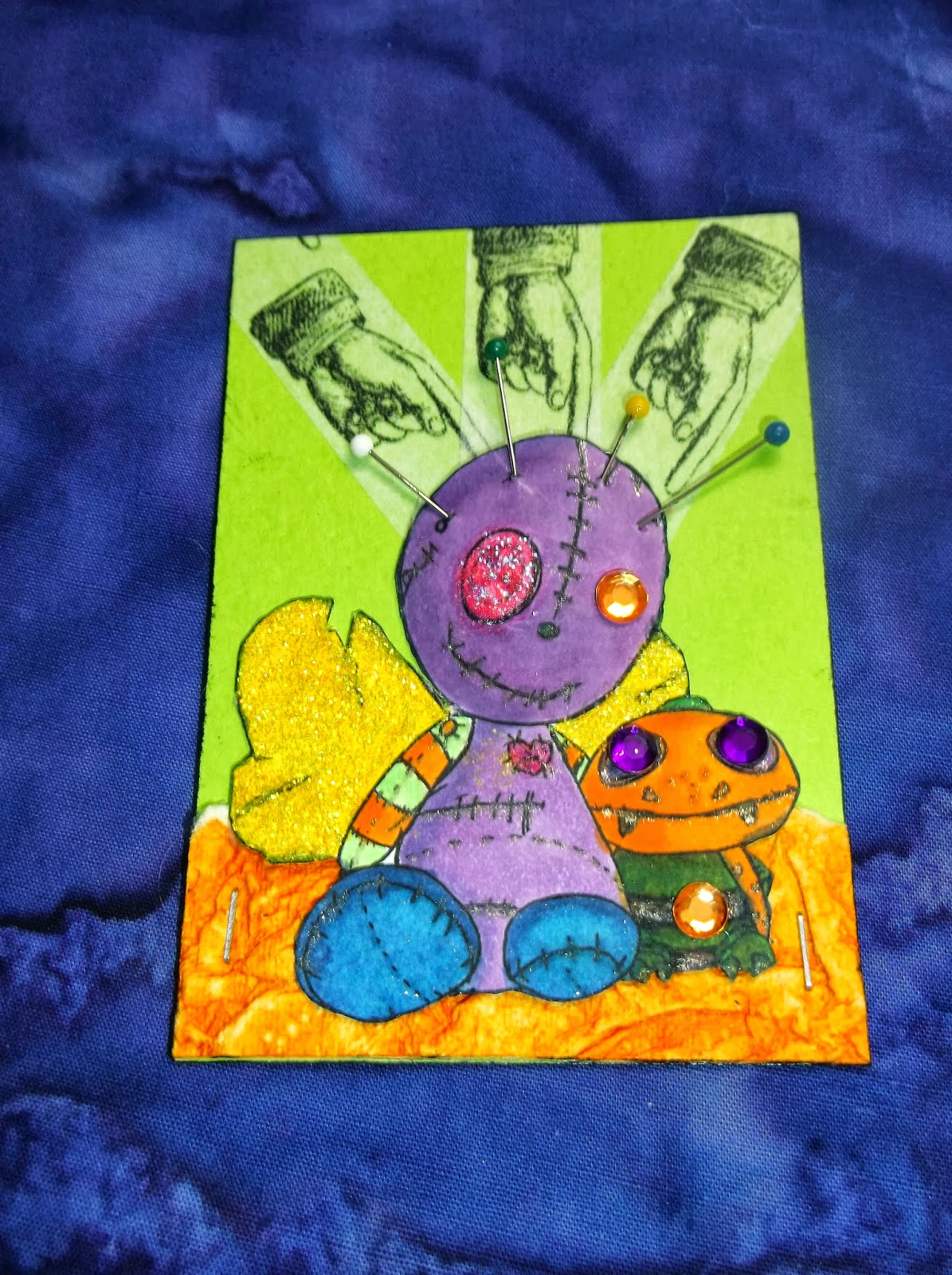 There are some days I guess most of us wishes we had a voodoo doll.  Giving a person a headache for the headache they gave you sounds like a viable option...right?

The image is Everyone Needs a Friend from Just Some Lines   The papers are from my stash.  I colored the image with Copics.  The Stickles were put on top of the colored image-Yellow for wings and Glam Pink for the eye.  I fussy cut the image, attached jewels, and Tim Holtz Tissue Tape-Elements as embellishments.  I glued the pins onto the back of the image with Mono Multi Glue.


I am entering this in the following challenges: 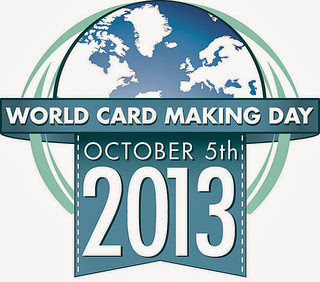 My easel card is about Neil Armstrong, documenting his famous quote as he stepped onto the moon on July 21, 1969.  I had just turned 14 and remember lying on the rug in front of the TV, wondering what Neil Armstrong was going to do when he stepped on the moon!  Our TV was often slightly out of focus.  The footage from the moon was even worse.  But it didn't matter, every image was utterly amazing and we were seeing it happen!

Armstrong always stated that he said "That's one small step for a man, one giant leap for mankind.  He said it doesn't make sense the way it was reported.  Mission Control said they didn't hear an "a", but it has been studied often and it seems he could have said "a man." 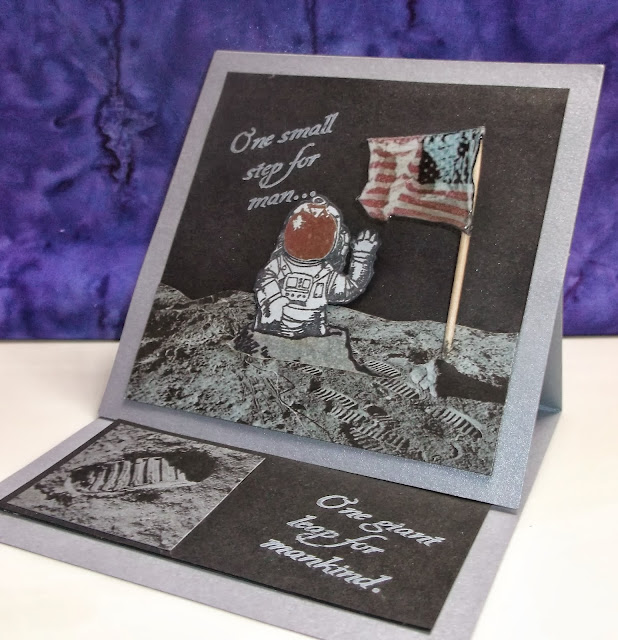 Back to the card!  The Drunken Stampers Challenge this week is Person: Neil Armstrong-Outer Space or an Astronaut!  There are awesome stamps and images of space, rockets, etc out there.  Have a blast joining our challenge!  You could be our next "Life of the Party!" 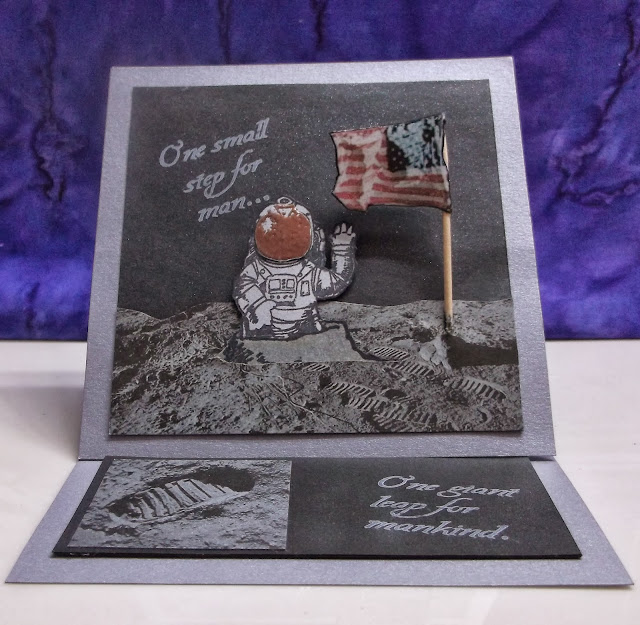 All of the stamps used are from Crackerbox Palace.  The silver card stock is from Club Scrap, the black shimmer card stock is from The Paper Cut.  The lunar surface and Neil Armstrong's footprint are NASA images ( all are free to use by US citizens because NASA is government funded ).  Check out the Hubble images once the government is no longer shutdown...they are awesome!

I fussy cut the Space Man and the flag from the NASA image.  I covered the flag with 3D Crystal Lacquer and attached it to a toothpick.   I stamped out another face mask and embossed it with Club Scrap Foil Embossing powder-Copper Foil.  The sayings were stamped in Colorbox Frost White Pigment ink. 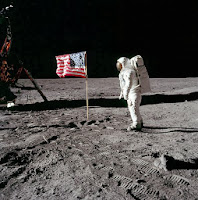 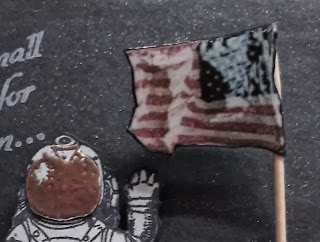 The two NASA images (above^) were used for the, footprint, lunar surface, and United States Flag. 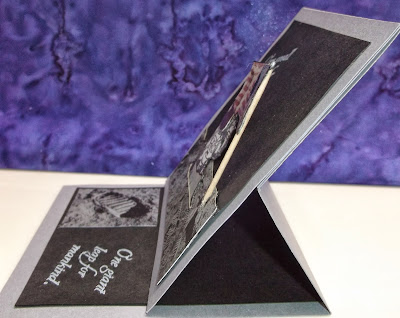 The flag is only attached to the "lunar "surface 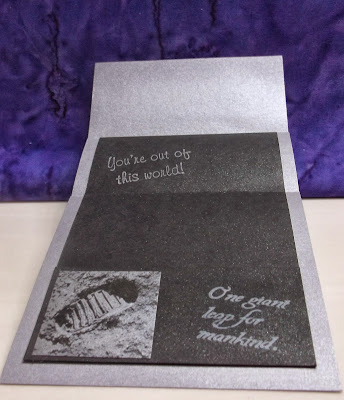 Inside the card I added the "You're out of this world" saying.

The rest of the Design Team have come up with some out of this world creations!   So now leap over, have a drink with us, and join the party at Drunken Stampers!  You have until Friday October 11th at 11:59pm PST to post your link and have a go at being "The Life of the Party."  I can't wait to see your creations! 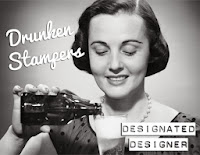 I am submitting this card into the following challenges:

Thanks for visiting!
Karen
Posted by Karen Schroeder at 3:00 AM 8 comments: 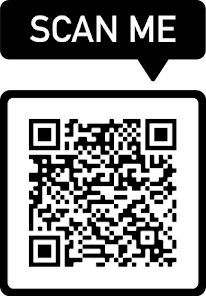 Scan to get to my site! As an affiliate I make a portion of the sales at no cost to you.